- October 13, 2022
The Drowsy Chaperone at Allen Contemporary Theatre
Reviewed by Aubrey Tarantine
Musical theatre has a way of bringing people together, whether you’re in the show or watching
it. Musical theatre allows us to set our worries down at the door and enter into a whole new world that
feels safe, or exciting, or complex but not in a “I need to figure out how to pay my rent this month” way,
but a “would I put people into meat pies?” way. Musical theatre allows us to connect, to escape, and to
find meaning – and that is what Directors Eddy Herring and Robyn Mead were able to capture in this
production of The Drowsy Chaperone.
The Drowsy Chaperone is described as a musical within a comedy. We’re thrown into a
quintessential 1920s musical that plays with the themes of love, jazz, a seedy underworld and
predictability that we see through the eyes of our guide, Man in Chair, which is played by the brilliant
Mikey Abrams. He engaged the audience so well and had such a natural back and forth with us
throughout the entire show that I felt like I could have been talking to my best friend. Abrams was
hilarious, witty, and has an ability to tell a story like no one else I have ever seen, and I was beyond
impressed by him in this role. The truth about this musical, though, is that every single actor was firing
on all cylinders.
Throughout the show we see a classic dynamic between Marycay Mussey, our Mrs. Tottendale,
and Scott Vollmer, who plays Underling. Mussey is honestly delightful to watch and clearly has a good
time on stage with Vollmer, who has some of the best comedic timing paired with a crisp delivery that
makes him perfect in this role. After meeting Tottendale and Underling, who let the audience in on the
fact that there’s to be a wedding, we meet David Helms, who plays Robert – our groom, and Heath
Bromley, who plays George – the best man. One of the greatest scenes is the first scene with Helms and
Bromley, because not only are they just enjoyable to watch together, but we get a fun tap number that I
was not expecting, but likely should have been. Both Helms and Bromley carry their roles well
throughout the entire production and are incredibly talented. We also quickly meet Taylor Sherry, who
plays Janet – our bride/starlet. The best thing about watching Sherry in this role was being able to feel
how well she understood it. Sherry plays up this role of starlet well and clearly understands the drama,
nuance, and fun someone like that would be having. Janet is to be married to George but goes back and
forth between wanting to be married and struggling with giving up her starlet life. Janet’s starlet life –
and the characters who populate that part of her world – is something we get to become more familiar
with in our B story line.
Our “B Story Line”, as it is described, includes what any good musical of the age would –
gangsters, showgirls, and puns. In the background of our show about weddings and love, we see the
other side of the starlet’s life. We meet her former boss, Feldzieg ̧ played by Blake Rice who was
wonderfully cast in this role and felt very convincing, the showgirl who wants to take our starlet’s role,
Kitty, played by Tessa Newman who was the picture perfect, stereotypical showgirl wanting to be a big
star, and our gangsters who are trying to make sure the starlet stays a starlet to make their boss money,
played by Nicholas Tischer and Brendan Tetter, who were absolutely hysterical in their roles, always in
sync, and had some of the best facial expressions and body language I have ever seen in a production.
Amidst all of this, we see one other storyline play out. That is the storyline of The Chaperone,
played by Kari Kennedy, and Adolpho, played by Aaron Adair. Watching Kennedy on stage was like
watching the embodiment of the biggest diva you know, but I mean that in the best way possible.
Kennedy took this role in well and her portrayal of The Chaperone was just smooth. I loved watching
Kennedy play with Adair, especially. Adair’s portrayal of Adolpho was priceless, and he brought a sense
of lighthearted absurdity that constantly made everyone in the audience laugh. Then at the very end we
meet Trix the Aviatrix, played by Rikki Sushaun who had an amazing voice and had me wishing their role
had more time on stage because of how talented Sushaun was, and our Superintendent Bill Wash, who
did a really good job at bringing us back into the “real world” for a moment.
The Drowsy Chaperone at the Allen Contemporary Theatre is a success by all accounts. My
cheeks were hurting because I was smiling so much. Every single actor was brilliant and understood the
assignment, the set was perfect, and our directors did a phenomenal job at casting, directing, and
setting the scene for us. If you are, or ever were, a musical theatre fan, this is the show for you. It’ll
mostly make you laugh, but by the very end you may well be crying – I know I was.
Be Well,
Aubrey
Audience Rating: PG (mature themes)
Accessible seating: Yes
Hearing Devices Available: No
Sensory Friendly Showing: No
Production Sound Level: Comfortable
Noises and Visuals to Know About: Yes (flashing light effects) 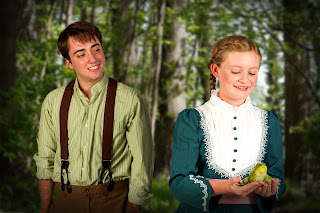 Tuck Everlasting Book by Claudia Shear and Tim Federle Music by Chirs Miller Lyrics by Nathan Tysen Based on the novel “Tuck Everlasting” by Natalie Babbitt Produced by Artisan Center Theater Reviewed by: David Ellivloc I wish I’d been braver sooner in life.  Until I timorously tried theater in my early twenties, I was terrified of new situations, new people, and being in the spotlight, even though I desperately wanted it all.  Being in the theater, either in the audience or on stage myself, was a big part of overcoming those fears and embracing life.  Tuck Everlasting: The Musical is based on a well-loved children’s book, which celebrates and encourages meeting life head-on, including what might be some of life’s most fearsome parts, the certain aging and eventual death of our loved ones and ourselves.   The two extremely young leads, neither old enough for a driver’s license, Tenley Heugatter ( Winnie Foster ) and Dominic Norris ( Jesse Tuck ) are the true embodiment of living f
Read more 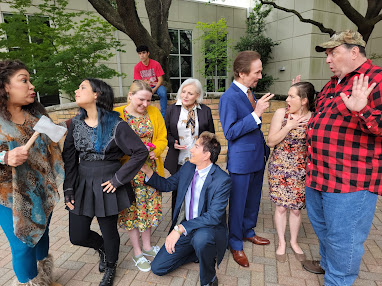 Like Kissing Moonlight Written and Directed by Stacey Upton Bracey Reviewed by Natalie Shaw, Dallas Theatre Journal In Northeastern Oklahoma, there are twelve acres of land sitting, wide open, but surrounded by tall trees and deep woods. In total, there are roughly 65 acres of land (maybe more) that was bought and paid for by my great- grandfather somewhere around the 1930s. Each of his children inherited twelve acres, and, my grandmother, being the first-born, got first pick on what land she wanted. Naturally, she chose the most beautiful strip. She and my grandfather settled there and retired early, after their kids were into their young adulthood. This is where I cut my teeth, so to speak. Several times a year, nearly once a month, my parents, sister and I showed up to play among the cousins, catch bugs outside, ride the horses, feed the cows and hunt for squirrels in the woods. Specifically, I can remember sitting in my grandparents' church one Sunday morning and pulling a huge
Read more

Natalie Shaw
Welcome to my blog! Thank you so much for being here. I hope you'll find exactly what you're looking for! Please subscribe/follow and leave a comment! Happy Reading, Friends!